Recycling Statistics, Facts & Figures for the UK in 2022

Global recycling rates are on the rise, but the world’s population is also continuing to grow year on year. As a result, we’re now producing more and more products in order to keep up with demand, which has led to us producing more waste than ever before.

But just how much of this waste is recycled and turned into new products, compost or sustainable forms of energy? And how many UK adults recycle in 2022? To find out this and much more, we’ve rounded up all of the most recent recycling statistics for the UK in 2022, including a survey of the population’s recycling habits and a breakdown of which age groups, gender and even cities recycle the most.

Recycling Statistics in a Nutshell

In February 2022, we surveyed 1,000 UK adults using Google Surveys  to find out what percentage of UK adults recycle. Our survey asked:

How would you describe your current attitudes towards recycling? 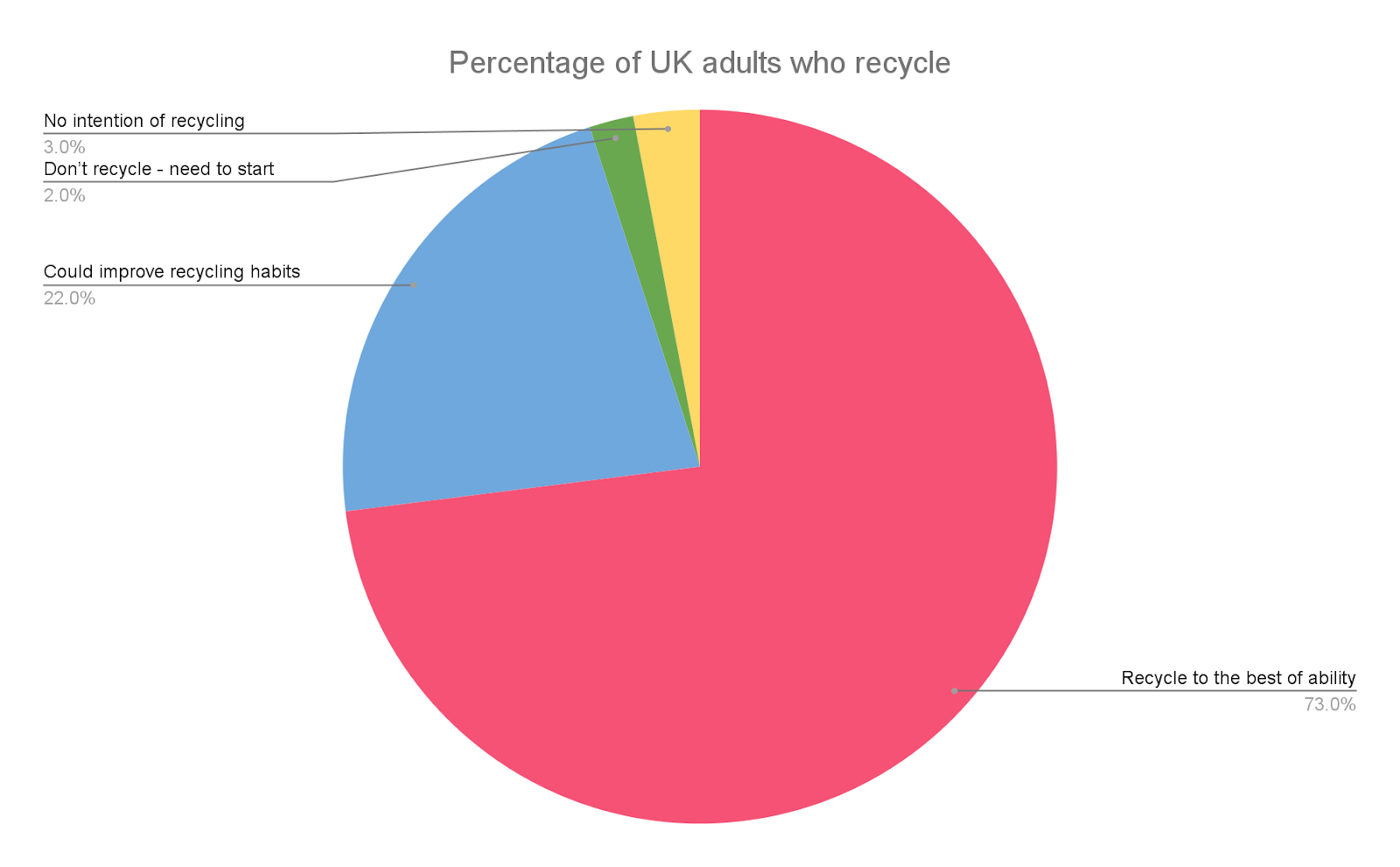 The survey found that:

Which age groups recycle the most in 2022?

Young people are often referred to as ‘Generation Green’, leading the way when it comes to new sustainability initiatives and raising awareness of climate and environmental issues. But on a day to day basis - who recycles more? Younger or older people? To find out, we asked each of our respondents to tell us which age category they were part of.

The table below shows a breakdown of recycling habits by age group. 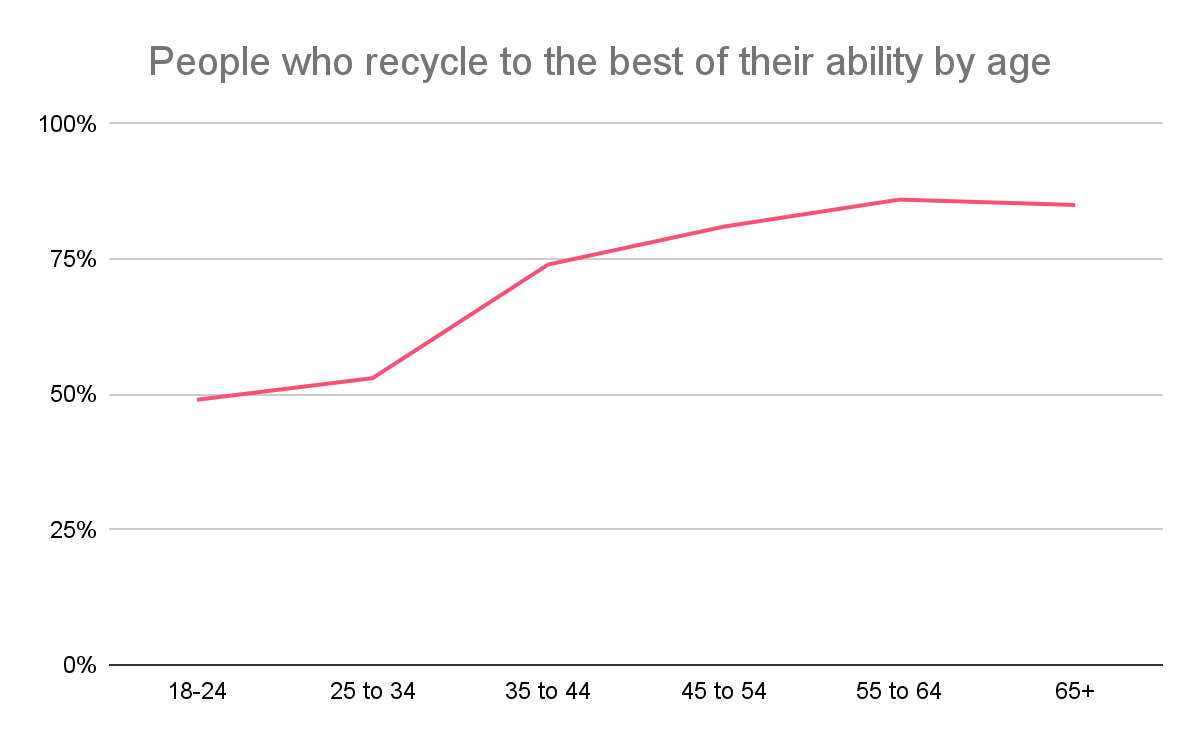 As you can see from the chart:

Which gender is the most eco-conscious? Men or women?

Who recycles more? Men or women?

Attitudes towards recycling by UK region in 2022

Is there a north south divide when it comes to recycling? Or are things fairly even when it comes to which parts of the UK recycle more? We analysed the findings from our survey to find out.

The table below shows the top 4 UK regions when it comes to recycling habits.

When it comes to regions:

The UK’s recycling habits on a city level

Are those living in busy city centres the most likely to recycle? Or are those in more rural parts of the country more concerned with the impact of their waste on the environment? To find out, we also asked our survey’s participants to tell us which city they live in.

The data revealed that:

Recycling isn’t always a walk in the park. When you’re in a hurry, it can be difficult to find out which bin a certain form of packaging belongs in - or even whether or not it’s suitable for recycling in your local area at all. This, combined with the washing out of cartons, tins and bottles and taking them out on the correct days or to your local recycling centres can often be enough to cause some to not be quite as thorough with their recycling.

That’s why we asked our respondents how thorough their recycling behaviours are, in order to get a better idea of how much effort UK adults put into recycling in 2022. 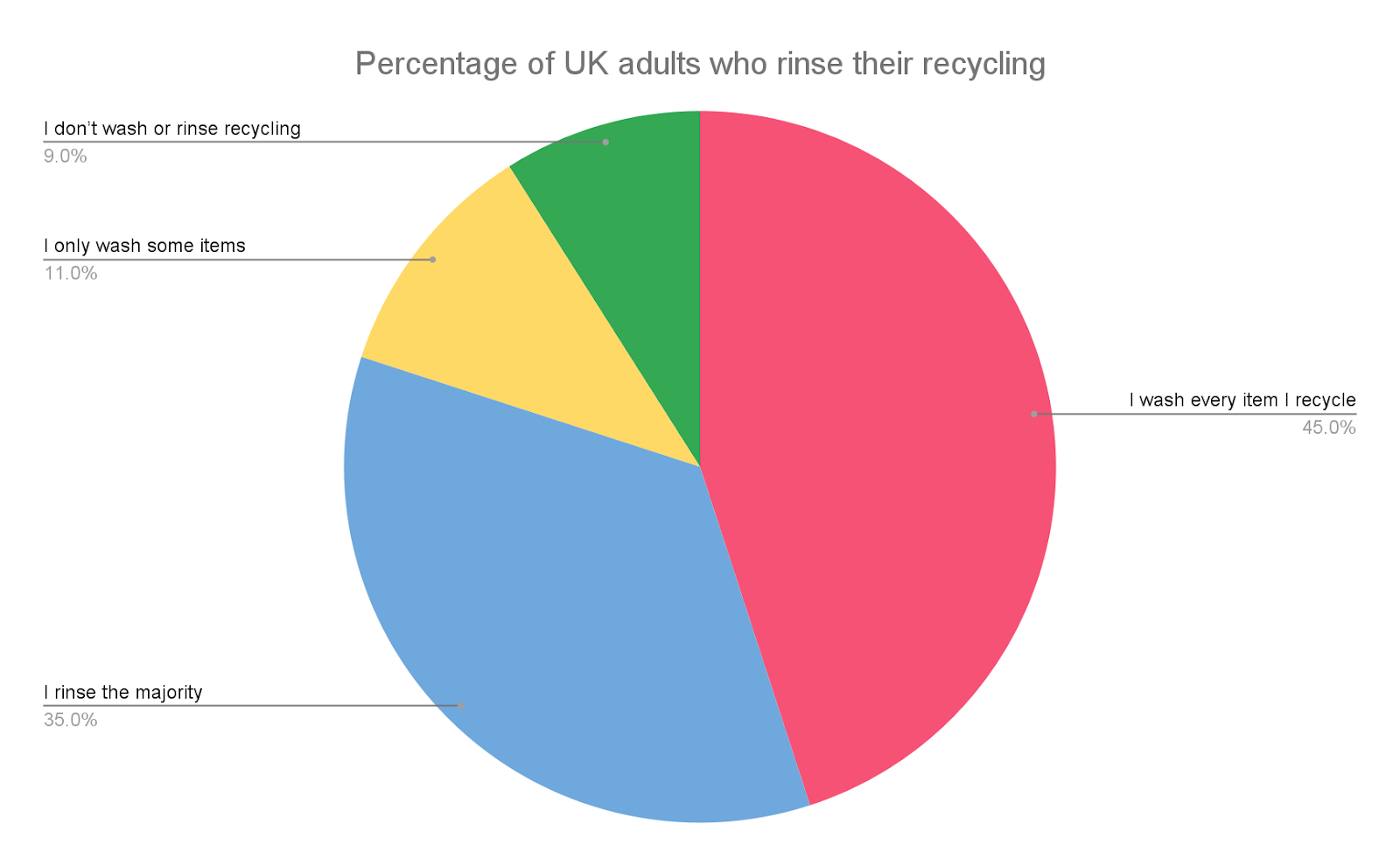 The survey found that:

Which age groups take the most care when recycling?

The first question of our survey revealed that young adults are the least likely to recycle to the best of their ability. But is the same true when it comes to how thorough they are when they do recycle?

Which parts of the UK recycle most thoroughly?

Our survey also asked for the locations of respondents who told us about their habits when it comes to washing or rinsing their household recycling waste. Our analysis of these findings revealed that:

But what about those who don’t rinse their rubbish?

Don’t worry - we’re not judging. It’s not always convenient to rinse out your cartons, bottles and tins. Particularly if you live in a busy household or regularly have visitors, it can take a really long time to wash each and every bit of recyclable material - and it’s not the most exciting past-time either! So which parts of the UK have the highest proportions of recycle-rinsing-dodgers? Well, our survey found that:

Are we putting the right things in the right recycling bins? 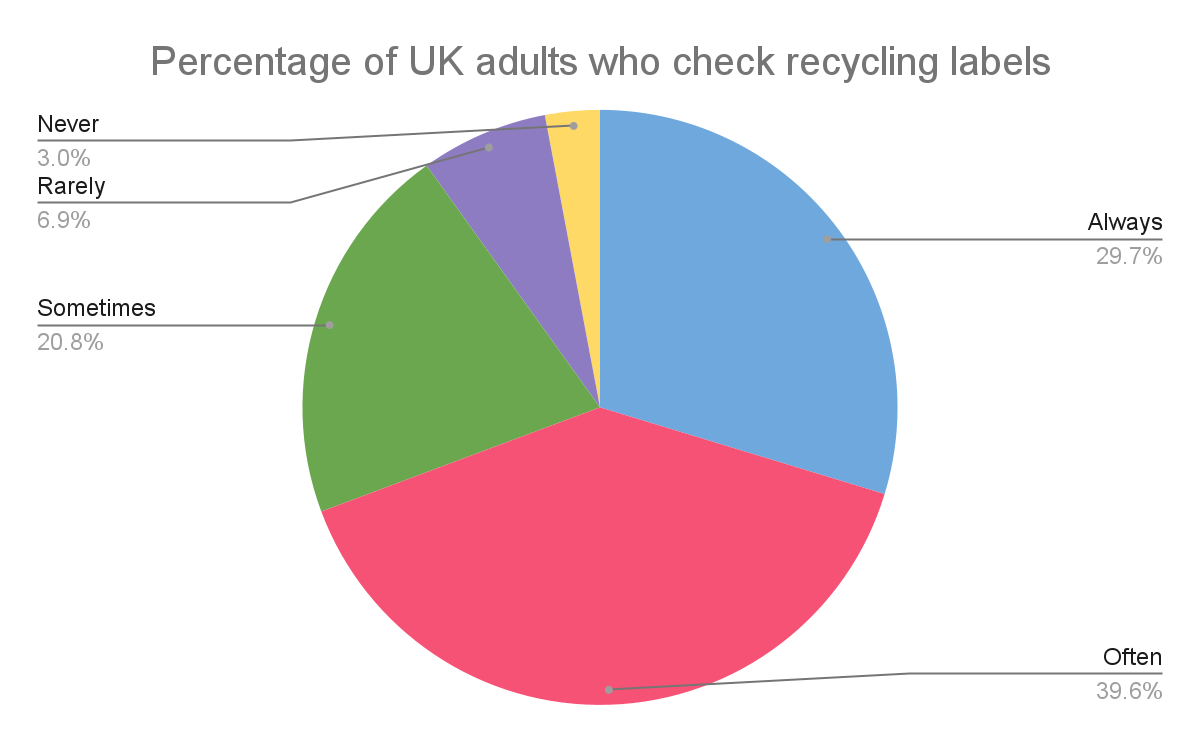 The survey revealed that:

Our survey found that:

Which age groups are most likely to check packaging’s recycling instructions?

Who’s most likely to double check a material’s label before putting it in the recycling? Is it older people or younger? Our survey found that:

Which parts of the UK check recycling labels most thoroughly?

Our survey also found that:

At a city level:

Which materials confuse the British public most when it comes to recycling?

What do many of us do when we’re struggling to figure something out? That’s right, we Google it! And it turns out, things are no different when it comes to recycling. To find out which materials’ recycling rules confuse us the most, we used the tool Keyword Finder to analyse online searches for terms beginning with ‘can you recycle…’. 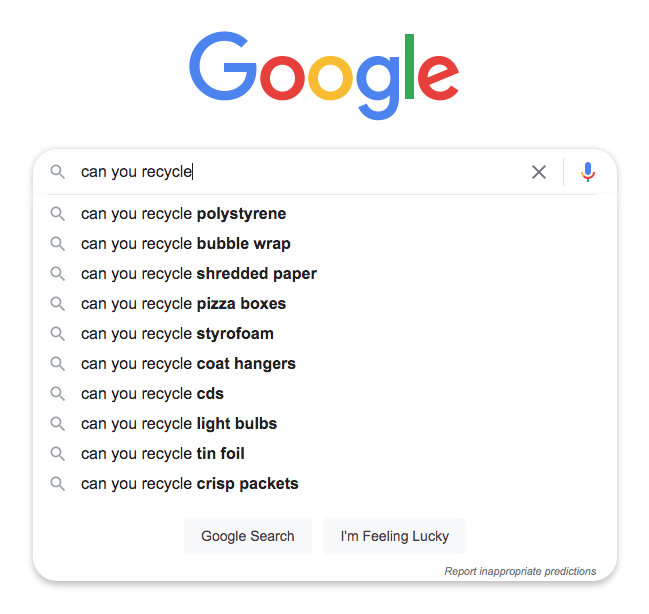 The table below shows which items we search for online the most when looking for information about their suitability for recycling.

As you can see from the table:

Which country has the highest recycling rate?

The results from our survey and online search data analysis have made it clear that recycling is something many of us do here in the UK. But what about the rest of the world? Are they as dedicated to recycling as we are? And which country recycles the most?

To find out, we took a look at data from the OECD’s most recent report: Environment at a Glance 2020: Waste and Materials. 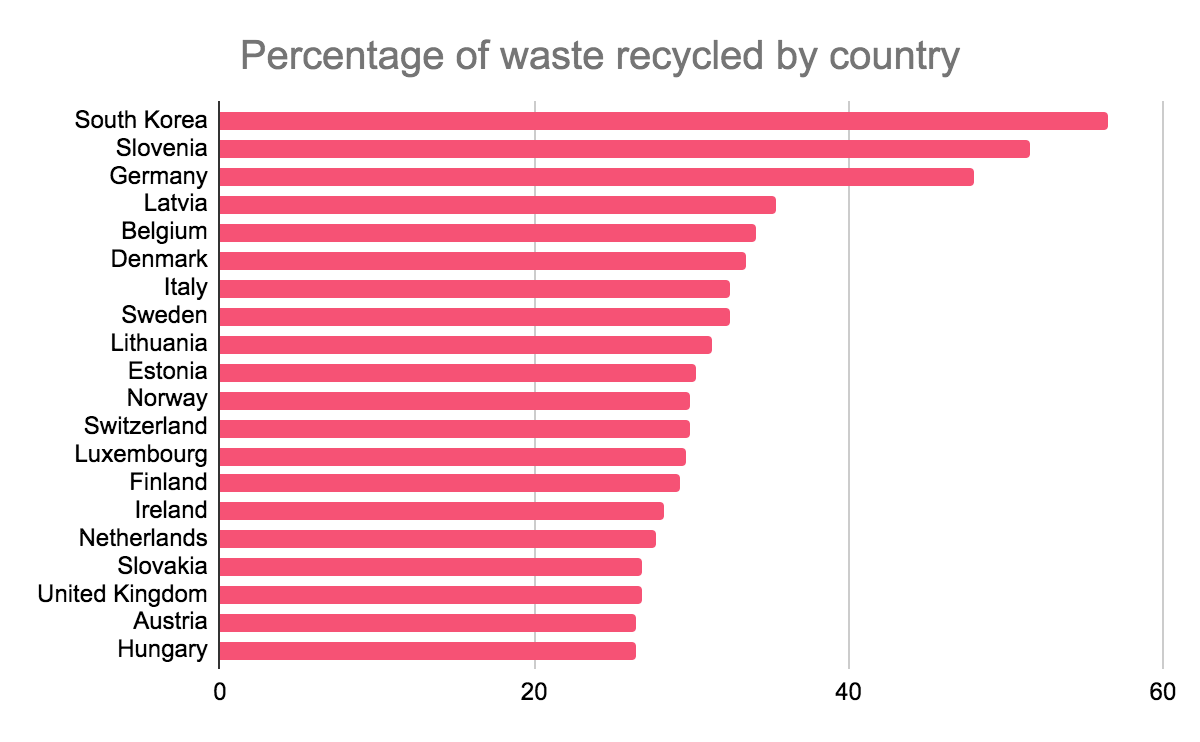 As you can see from the chart above and table below:

The UK’s Recycling Facts, Figures and Statistics of 2022

We hope our latest recycling statistics have ‘bin’ insightful and helped you learn more about the state of recycling in the UK in 2022! If you’re on the hunt for some sustainable, environmentally friendly packaging options, check out our range of eco packaging. 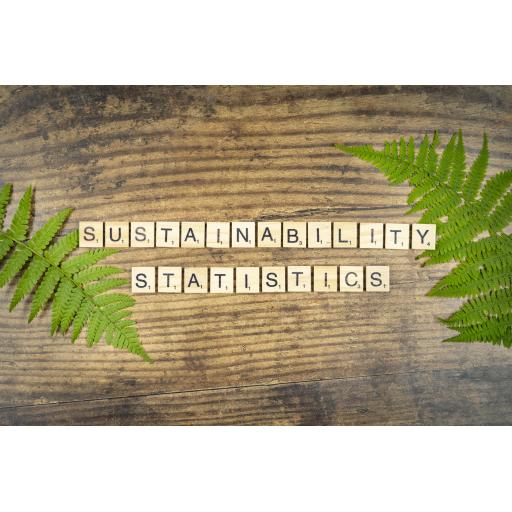 Sustainability Statistics, Facts & Figures for the UK in 2022 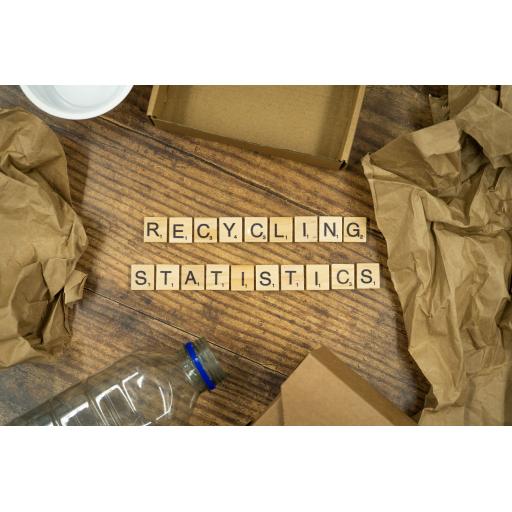 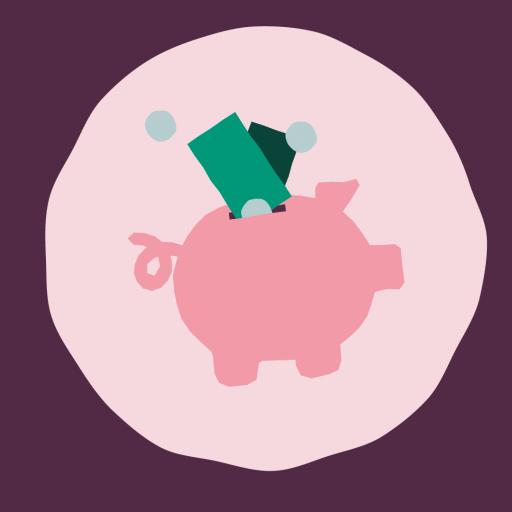 Important Update - How the Plastic Packaging Tax affects you 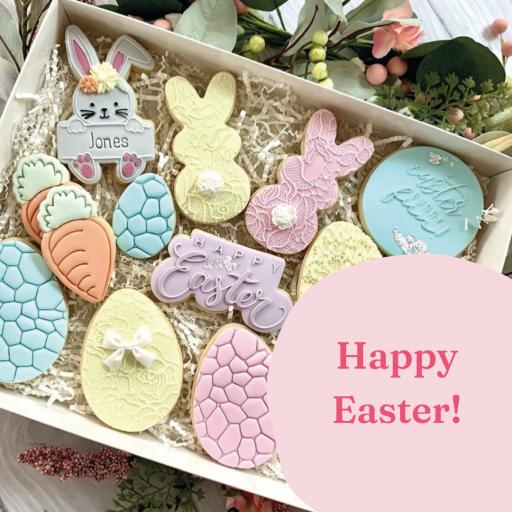 How to package your products this Easter